The maximum credible accident has occurred!

Not only large projects are hit by setbacks - this can also happen even on a small scale. And that happened today with AstroDIY: my 3D printer is dead!
What happened? I had run a long print job - over 1.5 days while on vacation. Unfortunately, the 3d-print went completely wrong, as a print layer suddenly broke and from this the structural integrity of the print object was completely destroyed. The printer however continued to print and produced only "filament spaghetti".
Since I would like to document everything, I also uploaded the timelapse of this print fail on Youtube.
Much worse, however, was the discovery that I had to make when cleaning up and repairing the printer: After I had cleaned all the parts, burned out the nozzle with the blowtorch and reassembled the printhead, I had to find out that the printer constantly measured a temperature of 358 degrees Celsius at the hotend - which of course resulted in an immediate reset of the printer.
Upon closer inspection, I found that the thermistor, which is supposed to measure the temperature, is defective and needs to be replaced.
So instead of printing, I was busy looking for spare parts and ordering them with the fastest possible delivery time.
Thus, the maximum credible accident occurred and the production of the test prints came to a complete stop! 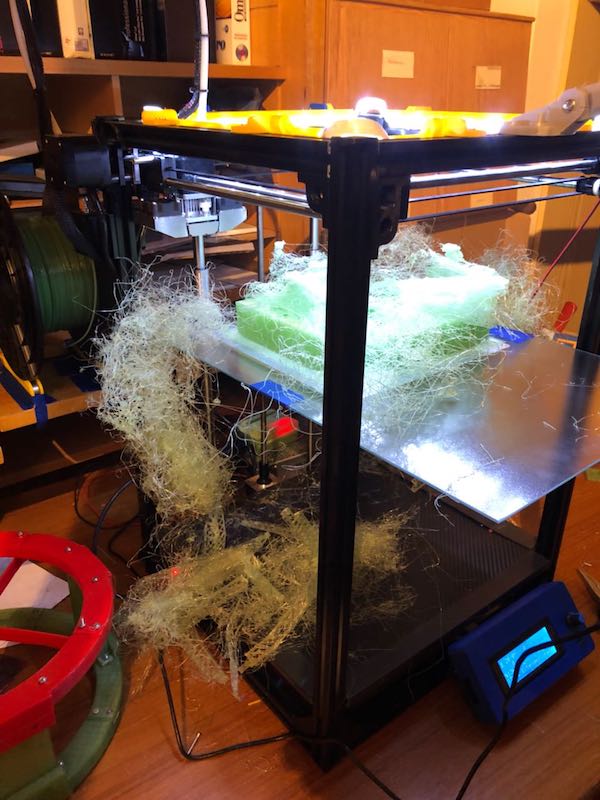